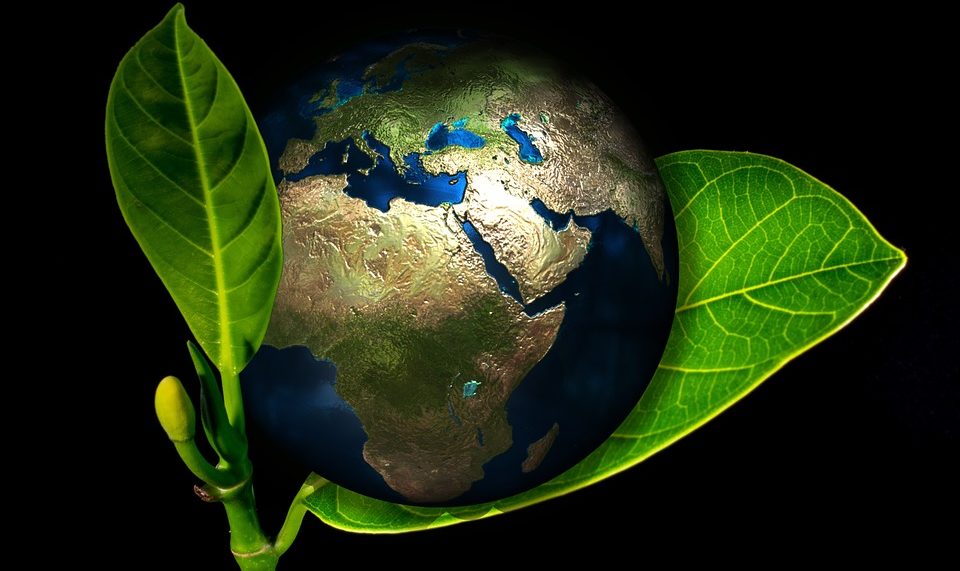 Facts of Earth that you can’t believe. 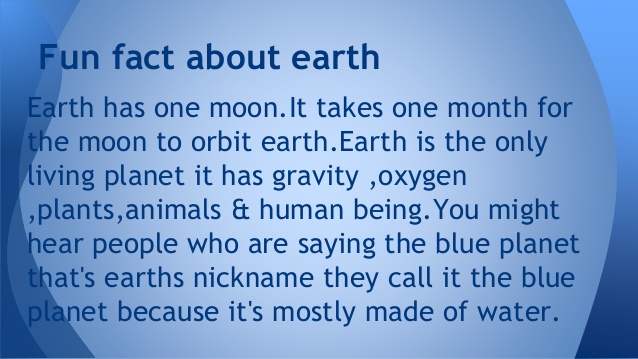 1.Before trees were common, the Earth was covered with giant mushrooms.

2.Our galaxy probably contains at least 2 billion planets like Earth.

4.The Earth’s core is about as hot as the sun.

5.Since at least the time of Pythagoras in 500 BC, no educated person believed the Earth was flat.

6.Every second, the Sun sends to earth 10 times more neutrinos than the number of people on earth.

7.Earth is the only place in the Solar System where water can be present in its three states: solid, liquid and gas.

9.Earth is the only place in the Universe where a total solar eclipse can happen.

10.The Earth’s atmosphere is made up of roughly 21% of oxygen.

11.The highest place on Earth, and closest to space, is Mount Chimborazo in the Andes.

12.There are about 22,000 man made objects orbiting around planet Earth.

15.Near about 200 tons of cosmic dust enter the Earth’s atmosphere every day.

17.Large parts of Canada have less gravity than the rest of Earth. The phenomenon was discovered in the 1960s.

18.The year 2015 will be one second longer than usual because of the slowing of the Earth’s rotation.

19.Earth days are getting longer by 1.7 milliseconds every century.

21.If the earth didn’t have the moon, our days would only be 6 hours long.

22.All of the world’s energy needs can be met with 1/10,000th of the light from the Sun that falls on Earth each day, according to the inventor Ray Kurzweil.

23.Only about .003 percent of the water on Earth can be used by humans.

24.For every grain of sand on every beach on Earth, there are 10,000 stars in the universe.

25.The farthest distance from Earth an astronaut has ever traveled was during the Apollo 13 in emergency.

28.20% of the Earth’s oxygen is produced by the Amazon rainforest.

29.The Earth’s magnetic field has been steadily weakening over the past 180 years, specially around Brazil and Argentina.

30.Global warming has raised the earth’s average surface temperature about 1.5°F (0.8°C) since the Industrial Revolution.

32.The Amazon represents more than half of the Earth’s rain forests.

33.Fossil evidence suggests that fish have been on Earth for about 530 million years.

34.Earth, Texas is the only place on Earth named “Earth.”

35.The 2011 earthquake near Japan increased the Earth’s rotation speed, shortening the day by 1.8
microseconds.

36.Each day, up to 4 billion meteoroids fall to Earth.

37.There are approximately 3.04 trillion trees on earth.

38.Rainbows are actually Circular. We don’t typically see a full circle rainbow because the Earth’s horizon blocks the lower part.

39.The Earth could eventually have a 1000-hour day in 50 billion years because the time it takes Earth to spin once on its axis keeps increasing.

40.Oxygen took up residence in the Earth’s atmosphere 2.45 billion years ago.

41.Continents split up at the same speed finger nails grow.

43.About 30% of solar radiation is reflected back to space and the rest is absorbed by oceans, clouds and land masses.

45.More than half of the Earth’s surface is not subject to any nation’s laws.

47.The Queen of the UK is the legal owner of one-sixth of the Earth’s land surface.

48.It takes 8 minutes and 20 seconds for light to travel from the sun to the earth.

49.There are more living organisms in a teaspoonful of soil than there are people on earth. 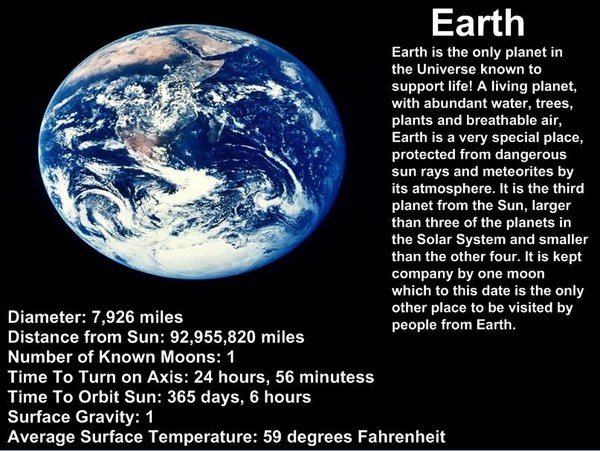