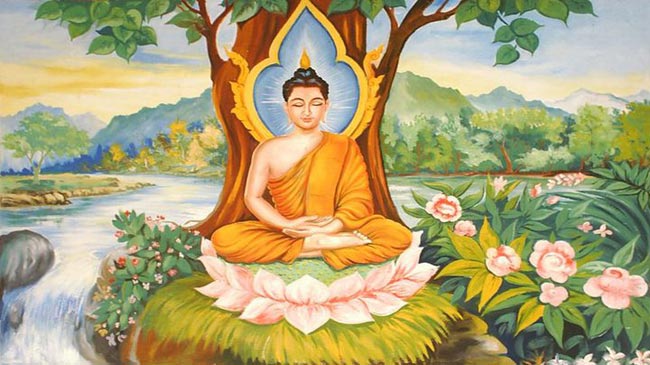 Hello, Friends! There comes a time in our life when we feel low, down or stressed. At that point in time, we require some inspiration which we can follow to feel better. So, if you are also feeling low or stressed, here we are to help you out. Here is Buddha Quotes: Inspirational Thoughts by Gautama Buddha.

About Buddha- Founder of Buddhism

Gautama Buddha or Siddhartha Gautama was the founder of Buddhism religion. He is worshiped as a manifestation of God. He enlightened himself and his teachings and thoughts have led to the enlightenment of many of his followers.

Gautama Buddha was well known for his calm, loving, peaceful and spiritual nature. He helped a lot of people throughout the span of his life. His teachings are helping to this date also.

Gautama Buddha was born as Prince Siddhartha around 566 BC to the King and Queen of Kapilvastu “Nepal” Shuddhodana and Mayadevi. Soon after his birth an astrologer predicted that Prince Siddhartha was destined to lead the life of a sage and that he would give up his right to the throne and all worldly pleasures.

Shuddhodana and Mayadevi were shattered upon hearing the news and decided to prevent him from being exposed to the outside world, keeping a close watch on him.

A young Siddhartha never left the palace and saw nothing more than the luxuries of it. His parents hoped that he would get used to the luxurious lifestyle and never give it up.


However, as Siddhartha grew older he became more and more curious. On one particular day, he asked his charioteer to take him on a tour of the city. The first person they came across was a old man, weak and frail by the side of the road. Siddhartha was intrigued by him and was made to understand that with old age comes weakness and ill health

The next person he came across was a sick man in great pain. Siddhartha was told that the man was not immune of diseases. He then saw the body of a dead person being carried to the cremation ground. The young Prince was told that everybody would die one day and leave the world. At the end of his city tour, Siddhartha came across a sage who was calm and serene. He was told that such men give up their worldly possession and desires.

Gautam Buddha
was deeply troubled by his first experience of the outside world. Several questions crossed his mind about life and death. He then decided that to get answers to his questions, he would have to leave the palace and give up on his luxurious life. At the age of 29, Siddhartha left the palace at night while his wife and son were asleep. He wandered far and wide, trying different ways to find the path of truth. Then finally he reached the city of Boudhgaya “gaya”Bodhgaya and started meditating under a large fig tree.

After 49 days of meditation, at the age of 35, Siddhartha attained enlightenment. From that day on he was known as Buddha or the ‘Awakened One.’ He was named after the Bodhi tree under which he meditated.

shared his knowledge with five sanyansis who meditated with him. Together, they traveled across the country teaching key principles of Buddhism.

Several monuments have been built in India which were built as tributes to Buddhism- The world renowned Ajantha and Ellora caves, Kanheri and Karla caves, as well as temples and universities at Sanchi, Amaravati and other places.

Gautam Buddha passed away in 483 BC. Though he lived centuries ago, his birthday is still celebrated as Buddha Jayanti in India. The Bodhi tree is still worshipped as a symbol of Enlightenment even today.

Here are some beautiful quotes from the founder of Buddhism. Follow these quotes for the enlightenment of body, mind, and soul:

★Don’t be a Parrot in life, be an Eagle. A Parrot talks way too much but an Eagle is silent and has the willpower to touch the sky.
★Over thinking is the biggest cause of unhappiness.
★Never get too attached to someone, because attachments lead to expectations and expectations lead to suffering.
★Don’t tell people your plans, show them your results.
★Each morning we are born again. What we do today is what matters most.
★Your worst enemy cannot harm you as much as your own unguarded thoughts.
★If you want to be successful, you must respect one rule: Never Lie to Yourself.
★You will not be punished for your anger; you will be punished by your anger.
★Don’t educate your children to be rich. Educate them to be happy, so they know the value of things, not the price.
★Holding onto anger is like drinking poison and expecting the other person to die.
★Just as a solid is not shaken by the storm, even so, the wise are not affected by praise or blame.
★Three Things cannot be long hidden: The Sun, The Moon, and The Truth.
★Every experience, no matters how bad it seems, holds within it a blessing of some kind. The goal is to find it.

During meditation, Gautama Buddha came to know about the truths of life known as the Four Noble Truths

1. Dukkha: The truth of suffering.

Life means suffering. One has to struggle, sacrifice, and suffer through the course of his/her life. Without suffering one can’t value happiness.


2. Samudaya: The truth of the origin of suffering.

Suffering takes its birth when there is a desire, expectation or attachment. Higher the desires more will be the suffering and pain of not having it.

3. Nirodha: The truth of the end of suffering

It is true that life is full of suffering, sacrifices, and struggles. But the best part of life is that the end of all this suffering and pain is attainable.

4. Magga: The truth of the path to the cessation of suffering.

As said there is a path out of suffering. Follow the eightfold path.


We hope that the Buddhist philosophy has helped you in regaining your internal energy. So, now take time to share it with your friends and loved one so that they can also get to know about these wonderful Buddha Quotes: Inspirational Thoughts by Gautama Buddha.