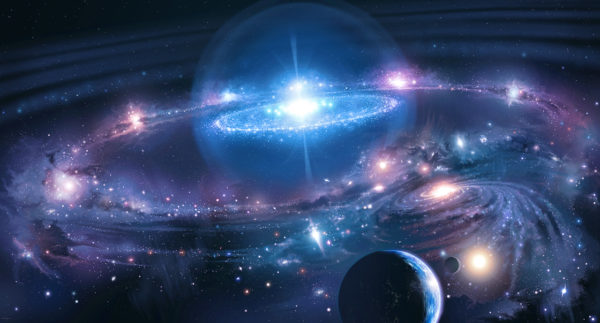 Universe, the whole cosmic system of matter and energy of which Earth, and therefore the human race, is a part. Humanity has traveled a long road since societies imagined Earth, the Sun, and the Moon as the main objects of creation, with the rest of the universe being formed almost as an afterthought. Today it is known that Earth is only a small ball of rock in a space of unimaginable vastness and that the birth of the solar system was probably only one event among many that occurred against the backdrop of an already mature universe. This humbling lesson has unveiled a remarkable fact, one that endows the minutest particle in the universe with a rich and noble heritage: events that occurred in the first few minutes of the creation of the universe 13.7 billion years ago turn out to have had a profound influence on the birth, life, and death of galaxies, stars, and planets.


Here i have Written some Imp Questions that generally ask in Examinations :-

1-Which of the following planets is known as ‘Morning Star’?

2-Which planet of the solar system spins on its axis at the fastest rate?

4- Which planet looks reddish in the night sky?
(a) Mercury (b) Mars (c) Jupiter (d) Saturn

6-Which of the following is the largest of the inner planets?
(a) Venus (b) Mercury (c) Mars (d) Earth

7-In 1610, Galileo Galilei discovered four moons of which planet?
(a) Saturn (b) Jupiter (c) Neptune (d) None of these

8-In order of their distances from the Sun, which of the following planets lie between Mars and Uranus?
(a) Earth and Jupiter (b) Jupiter and Saturn (c) Saturn and Earth (d) Saturn and Neptune

9-The planet Mercury is difficult to be observed most of the time because:
(a) it gets hidden behind Venus (b) it goes too far away from the Earth (c) it being too close to the Sun, gets hidden by the glare of the Sun (d) it cannot be seen at night as at that time no sunlight falls on it.

13-‘The length of its day and the tilt of its axis are almost identical to those of the earth’. This is true of:
(a) Uranus (b) Neptune (c) Saturn (d) Mars

15-Which of the following is the brightest planet?
(a) Mercury (b) Venus (c) Mars (d) Jupiter

18-Which one of the following planets takes the same number of days for rotation and revolution?
(a) Mars (b) Venus (c) Mercury (d) Jupiter

19-On which of the following planets of the solar system does the sun rise in the west and set in the east?
(a) Venus (b) Mars (c) Jupiter (d) Saturn

20-Which of the following planets of the solar system has the longest day?
(a) Mercury (b) Jupiter (c) Venus (d) Earth