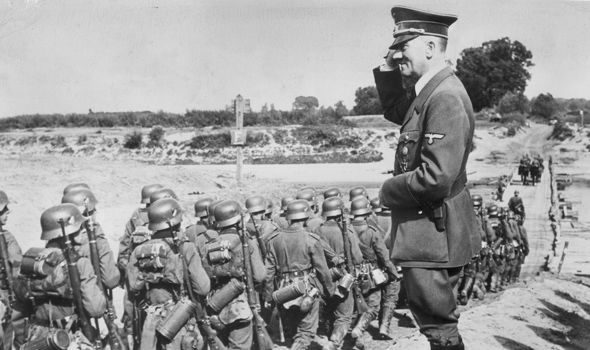 World War II was unprecedented and brought the world closest to the term “total warfare.” On average 27,000 people were killed each day between September 1, 1939, until the formal surrender of Japan on September 2, 1945. Western technological advances had turned upon itself, bringing about the most destructive war in human history. The primary combatants were the Axis nations of Nazi Germany, Fascist Italy, Imperial Japan, and the Allied nations, Great Britain (and its Commonwealth nations), the Soviet Union, and the United States. Seven days after the suicide of Adolf Hitler, Germany unconditionally surrendered on May 7, 1945. The Japanese would go on to fight for nearly four more months until their surrender on September 2, which was brought on by the U.S. dropping atomic bombs on the Japanese towns of Nagasaki and Hiroshima. Despite winning the war, Britain largely lost much of its empire, which was outlined in the basis of the Atlantic Charter.

When did World War II begin?

Some say it was simply a continuation of the First World War that had theoretically ended in 1918. Others point to 1931, when Japan seized Manchuria from China. Others to Italy’s invasion and defeat of Abyssinia (Ethiopia) in 1935, Adolf Hitler’s re-militarization of Germany’s Rhineland in 1936, the Spanish Civil War (1936–1939), and Germany’s occupation of Czechoslovakia in 1938 are sometimes cited. The two dates most often mentioned as “the beginning of World War II” are July 7, 1937, when the “Marco Polo Bridge Incident” led to a prolonged war between Japan and China, and September 1, 1939, when Germany invaded Poland, which led Britain and France to declare war on Hitler’s Nazi state in retaliation. From the invasion of Poland until the war ended with Japan’s surrender in September 1945, most nations around the world were engaged in armed combat.

1.The number of Chinese killed by the Japanese during World War II is greater than the number of Jews killed in the Holocaust.

2.The Mosque of Paris helped Jews escape the Nazis by giving them Muslim IDs during World War II .

5.Hitler’s plan for Moscow was to kill all its residents and cover it with an artificial lake.

6.Some 5,500 WW2 bombs are discovered in Germany every year and defused, an average of 15 per day.

8.During WW2, the U.S. Air Force dropped more than 5 million leaflets warning Japanese civilians to evacuate cities that were going to be bombed.

10.More Germans were killed by the Russians in the Battle of Stalingrad alone than were killed during the entire WW2 by America.

11.During the invasion of Poland in WW2, 720 Poles defended their position against 40,000 Germans, stopping their advance for 3 days.

12.Most kamikaze died in vain. Only 1 in 9 kamikaze pilots hit their targets during WW2.

14.During WW2, India produced the largest volunteer Army in world history: over 2.5 million men. At least 38 Indians received the Victoria Cross or the George Cross.

15.Queen Elizabeth II served as a mechanic and driver in World War II.

16.After the attack on Pearl Harbor during World War II , Canada declared war on Japan before the U.S. did.

17.The American secret service tried to spike Hitler’s food with female hormones to feminize him.

20.During World War II , two polish doctors saved 8,000 Jews from the Holocaust by faking a typhus epidemic that stopped the Nazis entering their town.

21.When Hitler informed the Czech president of the imminent invasion of his country, he suffered a heart attack and had to be kept awake to sign his surrender.

22.American soldiers started a riot in New Zealand during World War II because they didn’t segregate their bars and they didn’t want to drink with non-white people.

23.Brazil was the only independent South American country to send ground troops to fight in WW2, with over 25,000 soldiers.

24.Japan and Russia still haven’t signed a peace treaty to end World War II due to the Kuril Islands dispute.

25.More than twice as many people were guillotined by the Nazis as during the French Revolution.

27.In one of the last battles of World War II , American and German soldiers fought together as allies against an SS division to defend an Austrian castle.

28.In WW2, the Allies estimated German average monthly tank production using statistical analysis of their serial numbers. They were off by just one.

30.During World War II , Canada gave out buttons to people who tried to enlist but were refused due to medical reasons to show their willingness to fight.

31.London only reached its pre-WW2 population level in January, 2015.

32.Japanese Kamikaze pilots were allowed to return if they didn’t find a suitable target. One pilot was shot after his ninth return.

33.A Japanese man survived both the Hiroshima and Nagasaki atomic bombings during World War II .

35.The only casualty of the first bomb in WW2 to fall on British soil was a rabbit.

36.German Submariners had the highest casualty rate of all forces in World War II : 70% died in service.

38.D-Day was originally set for June 5 but had to be postponed for 24 hours due to bad weather.

39.At the beginning of World War II , the U.S. army was smaller than the army of Portugal.

40.During World War II , Japanese war criminal Tojo Hideki attempted suicide after the surrender. He was saved and resuscitated by Allied forces, who then hanged him.

42.More people died in Auschwitz than the British and American losses of WW2 combined.

43.Billy Mitchell, founding father of the U.S. Air Force, predicted in 1924 that air attacks would be made by the Japanese on Pearl Harbor.

44.During World War II , a Dutch warship was disguised as a tropical island to escape detection by the Japanese. It was the only ship of its class to survive.

45.The last German WW2 POWs weren’t released from the Soviet Union until 1956.

48.At least 1.1 million Jewish children were murdered during the Holocaust.

50.Fanta originated in Germany as a result of difficulties importing Coca-Cola syrup into Nazi Germany during World War II .

51.Despite being incarcerated in internment camps, thousands of Japanese-Americans fought for America in World War II — they had their own fighting unit.

52.A bear fought in the Polish Army in WW2. He carried shells to the frontline and was taught to salute.

53.During WW2, the Japanese slaughtered as many as 30 million Filipinos, Malays, Vietnamese, Cambodians, Indonesians and Burmese.

55.Queen Elizabeth taught herself to shoot in the grounds of Buckingham Palace during the World War II , in case a German parachutist attacked.

56.Nazi German troops were routinely given a narcotic called Pervitin, which allowed them to march for longer than normal.

57.Nutella was invented during WW2, when an Italian pastry maker mixed hazelnuts into chocolate to extend his cocoa supply.

59.Spaniard double agent Joan Pujol Garcia had the rare distinction of receiving an Iron Cross from the Germans and an MBE from the British during WW2.

60.The SS officer who captured Anne Frank and her family became a member of West Germany’s intelligence service after World War II . He bought Anne Frank’s book to see if he was mentioned.

61.In 1944, by a huge coincidence, a crossword puzzle was printed with answers all containing D-Day operation “code names”, which sent MI-5 into a panic thinking their invasion plans had been discovered.

62.About a third of all Jewish people alive at that time were murdered in the Holocaust.

63.Hitler planned to collect thousands of Jewish artifacts to build a “Museum of An Extinct Race” after the war.

64.During WW2, when Hitler visited Paris, the French cut the lift cables on the Eiffel Tower so that Hitler would have to climb the steps if he wanted to reach the top.

65.During World War II , a Japanese Consul saved 6,000 Jews from the Holocaust by writing them all Visas to Japan even after the government told him not to.

66.At the end of the WW2, U.S. censors kept the news of Germany’s unconditional surrender secret from the public for 11 hours.

67.The first Cannes Film Festival was called off after the screening of just one film due to the outbreak of World War II .

68.During WW2, the Oscars’ statuettes were made of painted plaster due to a metal shortage.

69.The allies considered dropping glue to stick Nazi troops to the ground.

71.Lyudmila Pavlichenko, the most successful female sniper in history, was credited with 309 kills during WW2, including 36 snipers.

72.During World War II , the U.S. Navy partnered with the Mafia to protect the country’s ports.

73.During WW2, Nazi soldiers were fed massive quantities of methamphetamine for increased alertness and endurance.

74.During World War II , the Japanese invaded Alaska, and more Americans were killed or wounded defending Alaska than at Pearl Harbor.

76.Edward VIII, King of the UK in 1936, was a Nazi sympathiser and later argued that bombing England could bring peace by ending World War II .

78.During the outbreak of WW2, London Zoo killed all their venomous animals in case the zoo was bombed and the animals escaped.

79.A secret radio belonging to a British POW in WW2 was kept so well hidden that, when he visited the camp 62 years later, it was still there.

80.After WW2, 1,500 German scientists were given amnesty on the condition that they work for the U.S. government .

81.The only country to protest against the German annexation of Austria of 1938, right before World War II , was Mexico.

82.During WW2, a Japanese officer killed himself rather than order his 2000 Taiwanese subordinates to conduct a kamikaze attack.

83.Every single spy Hitler thought he had in Britain during WW2 was a double agent under British control.

84.During WW2, the lights of Big Ben were dimmed so that German bombers could not use it for reference.

85.The first time the Japanese people heard their Emperor’s voice was when he announced Japan’s surrender on the radio during World War II .

86.During WW2, Hajimi Fuji volunteered for the kamikaze but was refused because he had a wife and two children. His wife then drowned her two young girls and herself.

88.The attack on Pearl Harbor was detected by radar in advance, but the readings were misinterpreted.

89.The last war chief of the Crow Tribe captured 50 horses from the Germans in World War II.

90.After the Treaty of Versailles, French Marshal Ferdinand Foch said “This is not a peace. It is an armistice for twenty years.” Exactly 20 years and 65 days later, World War II broke out.

91.During WWII, a British sailor escaped his submarine from depths of 270 feet (82 m) and managed to get to the surface and survive.

92.After John F. Kennedy’s World War II PT boat was sunk, he wrote a message on a coconut asking for help. It worked. Kennedy kept the coconut and it became a Presidential paperweight.

93.Tommy Tucker was a squirrel who became a celebrity in the U.S., touring the country wearing women’s fashions while performing tricks and selling war bonds during World War II .

94.The “keep calm and carry on” slogan was originally dreamt up as a way of preserving morale in the event of a Nazi invasion of Britain.

95.During WW2, most people believed Germany would quickly crush the Soviet Union in 3 to 6 months. It took three and a half years and they lost.

98.20% of Poland’s population died in World War II , the highest percentage of any nation.

99.Hitler married Eva Braun less than 40 hours before they died.

100.The Taj Mahal was covered with a scaffold during World War II to make it look like a stockpile of Bamboo and misguide any enemy bombers.

101.Carrots don’t make your eyesight better. That was a lie from the British to cover up their technology from the NAZI during World War II .