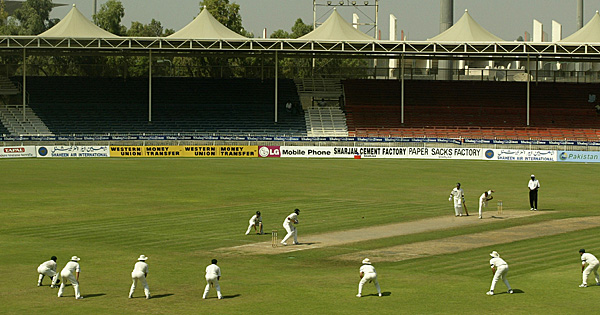 Cricket is a bat and ball game played between two teams. No one is sure when cricket was invented, but there are records of the game being played as early as the sixteenth century.

Cricket is played on an oval with a 22-yard (20.12-meter ) central strip called a ‘pitch’, with a wicket at each end. Two teams, each with 11 players, take it in turns to bat and field. Play starts when a bowler (from the fielding team) bowls the ball overarm at a batting player. The batting team tries to score as many runs as it can by hitting the ball with the bat and running between the wickets. The fielding team tries to get the players from the batting side ‘out’ in various ways, including hitting the wicket or catching the ball on the full after it has been hit. Once the batting team is all out, the teams swap over. The side batting second must beat the score of the team that batted first

There are various formats ranging from Twenty20, played over a few hours with each team batting for a single innings of 20 overs (i.e. 120 deliveries), to Test matches, played over five days with unlimited overs and the teams each batting for two innings of unlimited length. Traditionally cricketers play in all-white kit, but in limited overs cricket they wear club or team colours. In addition to the basic kit, some players wear protective gear to prevent injury caused by the ball, which is a hard, solid spheroid made of compressed leather with a slightly raised sewn seam enclosing a cork core which is layered with tightly wound string.

Historically, cricket’s origins are uncertain and the earliest definite reference is in south-east England in the middle of the 16th century. It spread globally with the expansion of the British Empire, leading to the first international matches in the second half of the 19th century. The game’s governing body is the International Cricket Council (ICC), which has over 100 members, twelve of which are full members who play Test matches. The game’s rules are held in a code called the Laws of Cricket which is owned and maintained by Marylebone Cricket Club (MCC) in London.

1. Who Played Cricked at first ?
=>Prince Edward .(son of Edward -I) At Newenden (Kent)

3. What was the first name of Cricket ?
=>Creay

< Click here and be in Touch to get latest Update >