Every keyboard has a set of Function Keys F1-F12 on the top row, however, the old Computer sets used to have these keys gathered on the left side of the keyboard. While every function key caters special function, these can also be combined with Alt Keys and Ctrl Command keys to make the useful keyboard shortcuts. If you are a casual computer user, you might not really be aware of these function keys and their use. In this post, we will talk about what do these keyboard F1 to F12 function Keys do.

On some smaller keyboards, including those on many laptop computers, the F-keys may have a dedicated function such as changing the brightness of the screen, the volume of the audio, or other device-specific functions. On these keyboards, there is typically a separate Fn key that you can hold down to indicate that you want to use the key as a standard Function key. For instance, on the MacBook Pro laptop Computer, the F12 key’s primary function is to increase the audio volume. If this key is pressed while the Fn key is held down, the key will register as F12, and trigger any software functions that are configured to use this key.

If you would prefer not to press the Fn key to access your function keys, you can configure the keyboard to treat them as regular Function keys in your Control Panel or System Settings.

If your keyboard does not have a row of function keys, they are probably set up as secondary functions on other keys. Look for alternate labels on your keys, or consult your Computers manual for more information. 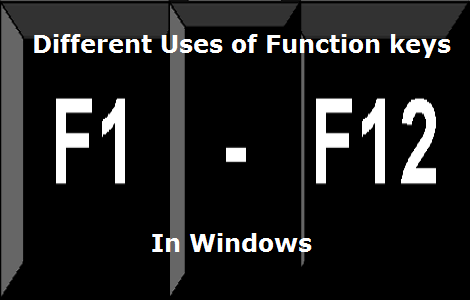 ★Hotkey to rename any of the highlighted icon, file or folders. Select a file/folder/icon and click F2 to rename it.
★Ctrl+F2 opens the print preview in MS Word.
★Fn+F2 mutes the volume of your PC.
★Alt+Ctrl+F2 opens document library in MS Office.
★When clicked during Boot Process, F2 key takes you to the BIOS setup of your PC.

★Fn+F3 to decrease volume in some laptops.
★Click Shift + F3 to change the text in microsoft world from upper to lower case
★Shift +F3 opens the search in Google Chrome.

★F4 is often used to close the applications. Alt+F4 closes the currently open program.
★Alt+F4 opens the shutdown option when no program is open.
★Ctrl+F4 closes a part of the running program such as a tab or a document.
★Click Fn+F4 to increase the volume in some laptops.
★F4 takes you to the address bar in Windows Explorer and Microsoft Edge.
★F4 opens a fullscreen window in some applications like Space Cadet and 3D Pinball.

★F5 Key is often used to refresh a web page.
★Click F5 to open Find & Replace window in MS Word.
★Starts a slideshow when clicked in PowerPoint.
★Fn+F5 decreases brightness on your monitor on some Laptop.

★Move the cursor to the address bar in Internet Explorer, Mozilla Firefox, and most other Internet browsers.
★Ctrl+Shift+F6 opens to another open microsoft world document.
★Reduce laptop speaker volume (on some laptops).

★Commonly used to spell check and grammar check a document in microsoft programs such as Microsoft Word, Outlook, etc.
★Shift+F7 runs a Thesaurus check on the word highlighted.
★Turns on Caret browsing in Mozilla Firefox.
★Increase laptop speaker volume (on some laptops).

★Function key used to enter the Windows startup menu, commonly used to access windows Safe Mode.
★Used by some Computers to access the Windows recovery system, but may require a Windows installation CD.
★Displays a thumbnail image for all workspaces in macOS.

★Refresh document in microsoft world.
★Send and receive e-mail in Microsoft Outlook.
★Opens the Measurements toolbar in Quark 5.0
★Reduce laptop screen brightness (on some laptops).
★With macOS 10.3 or later, displays a thumbnail for each windows in a single workspace.
★Using the Fn key and F9 at the same time opens Mission Control on an Apple computer running macOS X.

★In Microsoft Windows activates the menu bar of an open application.
★Shift+F10 is the same as right-clicking on a highlighted icon, file, or internet link.
★Access the hidden recovery partition on Compaq, HP, and Sony Computers.
★Enter CMOS Setup on some computers.
★Increase laptop screen brightness (on some laptops)
★With macOS 10.3 or later, shows all open windows for the active program.

★Open the Save as window in microsoft world.
★Ctrl+F12 opens a document In Word.
★Shift+F12 saves the Microsoft Word document (like Ctrl+S).
★Ctrl+Shift+F1 prints a document in microsoft world.
★Preview a page in Microsoft Expression Web.
★Open Firebug or browser debug tool.
★With an Apple running macOS 10.4 or later, F12 shows or hides the Dashboard.
★Access the list of bootable devices on a computer at startup, allowing you to select a different device to boot from (hard drive, CD or DVD drive, floppy drive, USB drive, and network)