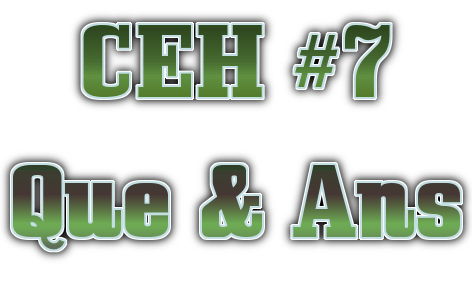 All these Questions are in this Section were asked in Certified Ethical Hacker Examinations of EC-Council .This is the 7th part

1- What tool should you use when you need to analyze extracted metadata from ﬁles you collected when you were in the initial stage of penetration test (information gathering)?
A. Armitage (GUI that visualizes targets and recommends exploits)
B. Dimitry (Deepmagic Information Gathering Tool)
C. Metagooﬁl
D. cdpsnarf (extract information from CDP packets)

2- . What is the way to decide how a packet will move from an untrusted outside host to a protected inside that is behind a ﬁrewall, which permits the hacker to determine which ports are open and if the packets can pass through the packet-ﬁltering of the ﬁrewall.
A. Firewalking (Active reconnaissance technique, analyze IP packet responses to determine ACL ﬁlters and map networks)
B. Session hijacking (exploit session to gain unauthorized access to information/service)
C. Man-in-the-middle attack (secretly relays and alters the communication between two parties)
D. Network snifﬁng (sniff out data ﬂowing over computer network links in real time)

A. The ﬁrewall itself is blocking ports 21 through 23 and a service is listening on port 23 of the target host.
B. The lack of response from ports 21 and 22 indicate that those services are not running on the destination server.
C. The scan on port 23 passed through the ﬁltering device. This indicates that port 23 was not blocked at the ﬁrewall.
D. The scan on port 23 was able to make a connection to the destination host prompting the ﬁrewall to respond with a TTL error.


Answer: C. The scan on port 23 passed through the ﬁltering device. This indicates that port 23 was not blocked at the ﬁrewall

4- . A penetration tester was hired to perform a penetration test for a bank. The tester began searching for IP ranges owned by the bank, performing lookups on the bank’s DNS servers, reading news articles online about the bank, watching what times the bank employees come into work and leave from work, searching the bank’s job postings (paying special attention to IT related jobs), and visiting the local dumpster for the bank’s corporate ofﬁce. What phase of the penetration test is the tester currently in?

6- A Security Engineer at a medium-sized accounting ﬁrm has been tasked with discovering how much information can be obtained from the ﬁrm’s public facing web servers. The engineer decides to start by using netcat to port 80. The engineer receives this output:


7- A hacker named Jack is trying to compromise a bankís computer system. He needs to know the operating system of that computer to launch further attacks.What process would help him?

Answer: B. The hacker successfully completed the banner grabbing.

9- Which of the following open source tools would be the best choice to scan a network for potential targets?
A. NMAP
B. NIKTO
C. CAIN
D. John the Ripper