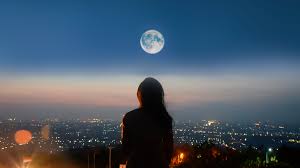 The Moon is Earth’s only proper natural satellite. At one-quarter the diameter of Earth (comparable to the width of Australia). It is the largest natural satellite in the Solar System relative to the size of its planet, and the fifth largest satellite in the Solar System overall (larger than any dwarf planet). Orbiting Earth at an average lunar distance of 384,400 km (238,900 mi), or about 30 times Earth’s diameter, its gravitational influence is the main driver of Earth’s tides and slightly lengthens Earth’s day. The Moon is classified as a planetary-mass object and a differentiated rocky body, and lacks any significant atmosphere, hydrosphere, or magnetic field. Its surface gravity is about one-sixth of Earth’s (0.1654 g); Jupiter’s moon Io is the only satellite in the Solar System known to have a higher surface gravity and density.

Here is  some important General Question of Space Science that generally asked in Competitive exams .Also  click here to read Most important numbers in the Universe that define our existence.

Que=>1
Why do the solar and moon eclipses occur?

Ans=> Eclipse-A celestial body is called under eclipse with respect to another body when, whole or a fraction of the first body is behind a 3rd body. When this happens the body -1 is not visible partially of fully from body-2.

When this happens with respect to the Sun, the Moon & the Earth, these phenomenon are called, Solar Eclipse & Moon Eclipse w.r.t. the Sun & the Moon respectively when viewed from the Earth.

Moon Eclipse- the Moon orbits the Earth once a month, and eclipses happen if it lines up exactly with the Earth and the Sun. Lunar eclipses occur at Full Moon, when Earth is between the Sun and the Moon.

Note that Eclipses do not take place every month because the orbits of the Moon and Earth are tilted at an angle. Most of the time, the line- up is not precise enough for an eclipse.

Que=>2
Why do the sun and moon looks the same size?

Ans=> It’s just a coincidence the Moon and Sun look the same size. The sun’s diameter is about 400 times larger than that of the Moon  but the Sun is also about 400 times farther away compared to Moon from Earth. And as we all know the farther a thing is from us, the small it appears to be.

So the sun and moon appear nearly the same size as seen from Earth (by chance,  they could have looked of different sizes but due to the same figure of 400 mentioned above, size vs distance, the Sun & the Moon appear to be of same size from Earth.

And that’s why we on Earth can sometimes witness that most amazing of spectacles, a total eclipse of the sun.

Why does the moon have no atmosphere?

Ans=> The mean thermal velocity of molecules of all the gases present in the Earth’s atmosphere is less than the Earth’s escape velocity (11.2 km/sec). Therefore, gases cannot escape from the Earth.

Moon being small in size and mass, gravity is also not so strong on the Moon. What it means actually is that, the value of the escape velocity on the moon is only 2.4 km/sec.

The molecules in all the gases, the mean velocity is more than 2.4 km/sec. Therefore, gases do not stay on the moon and escape from the atmosphere. As a result, there is no atmosphere on the moon.

Que=>4
Why cannot an astronaut hear the voice of other one while on the moon?

Ans=> Sound waves unlike the electro-magnetic waves (sun-light)  require a medium for their propagation. There is no air on the Moon. Hence, an Astronaut cannot hear the voice of other one while on the Moon.

In space suits, communication systems involving a transmitter and receiver is placed. This system works on radio waves which are essentially EMW (Electromagnetic Waves) which can travel through vacuum. Hence, using this system, sound signals can be transmitted as radio waves which can be directed as desired.

Que=>5
Why do Astronauts experience weightlessness in space?

Ans=> When inside a merry go round or when the lift descends fast, you might have felt weight-less-ness. What is weight and how does it feels less. Is it different from mass of a body?  Let’s talk about it.

The weight of the body is due to attractive gravitational force of earth. It is the reaction force felt by our body when the force due to our mass acts on a floor or ground. If this force is somehow cancelled, then body experience no force towards the earth. This condition is weightlessness.

Weightlessness is experienced by the astronauts because gravitational force of attraction is cancelled by force that appears because of the circular motion of astronauts around the earth (centrifugal force).

Mass refers to the amount of matter anybody has. Mass of a body remains constant even when feeling weightlessness.